Skip to main content
It looks like you're using Internet Explorer 11 or older. This website works best with modern browsers such as the latest versions of Chrome, Firefox, Safari, and Edge. If you continue with this browser, you may see unexpected results.

Why Aren't There More Black People in Oregon? A Hidden History

This 50 slide timeline and audio commentary was created by Walidah Imarisha for a program called "Why Aren't There More Black People in Oregon?: A Hidden History," which looks at the history of race, identity and power in Oregon and the larger nation. Oregon has a history not only of Black exclusion and discrimination, but also of a vibrant Black culture that helped sustain many communities throughout the state—a history that is not taught in schools. Oregon as a state was explicitly founded on the idea of creating a white nationalist utopia, and in that way is a useful case study to see the mentality that nationally shaped the institutions that govern our lives.

"White Privilege II" was created by Macklemore, Ryan Lewis Feat and Jamila Woods in collaboration with many other artists. 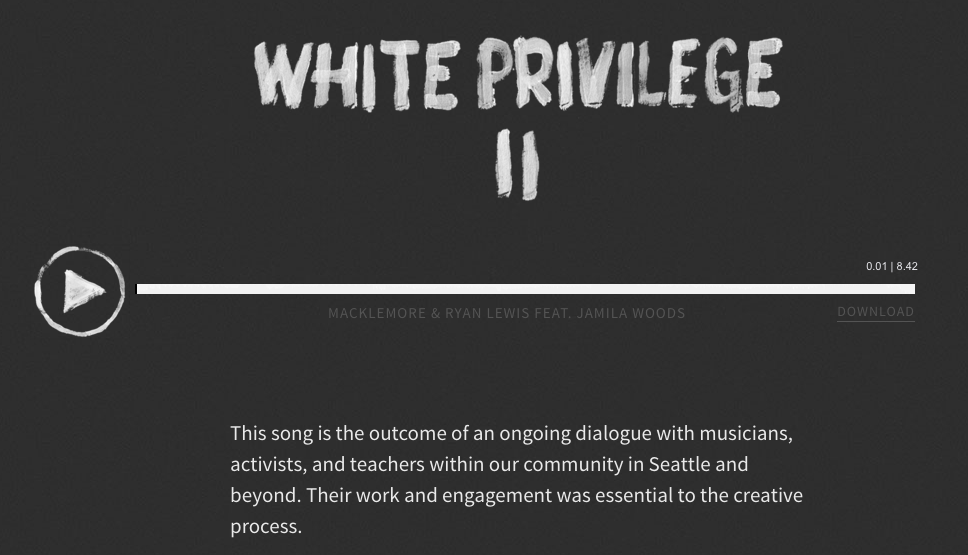 Published on Mar 9, 2015, this video was produced by Brushfire Creative Partners and Ifanyi Bell, with music by Megan McGeorge. The video is inspired by Bell's essay "The Air I Breathe" in the Fall/Winter 2014 issue of Oregon Humanities magazine, "Quandary."

Video projects on the Web

"It has become easier for white people to think about race through the superficial lens of thinking about other people, instead of themselves. Indeed, most of the people in this Op-Doc hadn’t given much thought to being white other than that it was obvious by the color of their skin. But when we dug a bit deeper, the discussion gets tense, and visibly uncomfortable. With this Op-Doc video, we’ve attempted to lean into that discomfort and prompt some self-reflection."

More films available to view free on the Web

Aamer Rahman (Fear of a Brown Planet) -- Reverse Racism  Cultural Genocide tells the story of "The Truth and Reconciliation Commission in Canada has concluded the country’s decades-long policy of forcibly removing indigenous children from their families and placing them in state-funded residential Christian schools amounted to "cultural genocide." Dr. Joyce DeGruy on Post Traumatic Slave Syndrome  Immigrants for Sale details the for-profit detention center industry: "the detention of migrants has become a multi-billion dollar industry in which immigrants are sold to the highest bidder and traded like mere products." Malcolm X: Make It Plain is a PBS American Experience documentary on the life of Malcolm X. Michelle Alexander on Mass Incarceration and the New Jim Crow in this film, Michelle Alexander, "highly acclaimed civil rights lawyer, advocate, and author of The New Jim Crow: Mass Incarceration in the Age of Colorblindness, delivers the 30th Annual George E. Kent Lecture." Mirrors of Privilege: Making Whiteness Visible "Use this groundbreaking film and conversation guide in your organization to help bridge the gap between good intentions and meaningful change." Schooling the World: The White Man's Last Burden, part 1/7 and part 5/7 asks "what really happens when we replace another culture’s canon of knowledge with our own?  Does life really get better for its people? This film takes a challenging, sometimes funny, ultimately deeply troubling look at the role played by modern education in the destruction of the world’s last sustainable land-based cultures." The Whiteness Project by PBS contains interviews from "over 1,000 white people from all walks of life and localities in which they are asked about their relationship to, and their understanding of, their own whiteness." Whitewashed: Unmasking the World of Whiteness "chronicles White Americans reflecting on white racial identity and racism."

The History of Whiteness, Kat Blaque